The CamPaIGN (Cambridgeshire Parkinson’s Incidence from GP to Neurologist) study was set up in the year 2000 by Professor Roger Barker and Dr Tom Foltynie, and has been run in more recent years by a team led by Dr Caroline Williams-Gray. This observational cohort study aimed to include every new case of Parkinson’s diagnosed in Cambridgeshire over a 2 year period (2000-2002) and to track disease progression in this group of patients over time. It was the first study to take this approach of studying a population-representative, unbiased group with Parkinson’s and describing the evolution of not only movement problems but also cognitive problems over time. This long-running study continues to generate critically important information about rate of disease progression, and how variable this is, in a typical Parkinson’s population. CamPaIGN participants continue to be assessed every 2 years. To date, the CamPaIGN study has:

This internationally-recognised study has led to many research publications, and is helping to pave the way for our ultimate goal of developing more targeted treatment approaches for different groups of patients. We are hugely grateful to all the participants who have been involved in this important study for so many years.

CamPaIGN has received funding from a number of organisations over the years including the Wellcome Trust, the Patrick Berthoud Trust, the Parkinson’s Disease Society (now Parkinson’s UK) and the MRC. 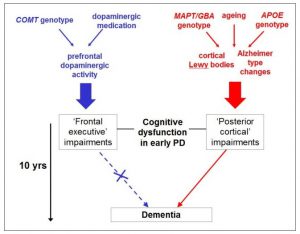 Proposed pathways leading to cognitive dysfunction in early Parkinson’s disease and their relationship to the development of later dementia.

The PICNICS (Parkinsonism: Incidence and Cognitive and Non-motor heterogeneity In CambridgeShire) study is a second observational cohort study which tracks the progression of patients with Parkinson’s disease over time, and is similar in design to the CamPaIGN study. The study recruited a large group of patients (299) who were newly-diagnosed with Parkinson’s disease between 2008 and 2013, and assessed them with detailed clinical measures, as well as memory and thinking tests and blood tests. We are continuing to follow-up PICNICS study participants every 18 months in our Parkinson’s Research Clinic. One of the aims of this study is to replicate our findings in the CamPaIGN study in a second independent group of people, which is important to strengthen our research and make sure our findings are robust. We have already found that the characteristics of the patients recruited to the CamPaIGN and PICNICS studies were very similar at diagnosis, and we are now exploring whether the same predictors of disease outcome are valid in PICNICS as in CamPaIGN.  The PICNICS study is also allowing us to explore new research questions focusing on non-motor symptoms such as gastrointestinal problems, as well as genetic and other biological markers of the disease which are measurable in blood samples.

PICNICS has received funding from Cure-PD, the Van Geest Foundation, the MRC and Parkinson’s UK.

ICICLE-PD (Incidence of Cognitive Impairment in Cohorts with Longitudinal Evaluation–PD) is a study run jointly between the University of Cambridge and the University of Newcastle, which is aiming to better understand how memory and thinking problems evolve in Parkinson’s. Just over a hundred people with newly-diagnosed Parkinson’s were recruited here at the Cambridge site between 2009-2011 and many of these are still being followed up in our research clinic every 18 months. Participants perform a detailed set of memory and thinking tests at each appointment, and blood samples are collected. A subset of participants have also had MRI brain scans and lumbar punctures done as part of this study. The study has already led to over 60 separate research publications focusing on a range of topics such as the role of brain imaging in predicting dementia, inflammatory markers in the blood as predictors of faster disease progression, and walking/balance problems and how these are linked to memory problems. We are continuing to work on blood and cerebrospinal fluid samples as well as brain imaging data, to establish the best biological markers to predict and track memory problems – which is important for future clinical trials.

ICICLE-PD is funded by Parkinson’s UK.