The role of the immune system in Parkinson’s disease

Our cohort studies, following large groups of individuals with Parkinson’s disease over time, have shown us that the disease progresses at different speeds in different individuals. Whilst some have a rapid disease course and may develop memory problems and even dementia within a few years of diagnosis, others have a much more benign course with relatively little motor or cognitive disability for many years. We propose that the immune response to the disease is an important factor which contributes to this variability in the disease course. Caroline Williams-Gray is leading a programme of studies investigating this theory. These include:

Ultimately, all of this work is helping us to better understand the immune changes that occur in both the brain and the peripheral blood in Parkinson’s. Furthermore, it is providing critical evidence that these changes are relevant in driving disease progression – with important implications for new treatment strategies targeting the immune system to slow the progression of Parkinson’s.

NET-PDD (the role of NEuroinflammation and Tau Aggregation in PD Dementia)  – is a longitudinal PET neuroimaging study led by Caroline Williams-Gray and co-ordinated by Antonina Kouli.

The primary goal of the study is to better understand the earliest changes in the brain that lead to memory problems and dementia in PD. Our previous research has contributed to the theory that two processes – tau aggregation, and inflammation within the brain – might play a critical early role. The NET-PDD study is investigating this theory by comparing markers of these processes in two groups of newly-diagnosed patients: a group at high dementia risk, and a group at low dementia risk; as well as healthy volunteers of similar age for comparison, recruited from the NIHR Cambridge Bioresource. Inflammation and tau deposits are measured using PET neuroimaging, as well as in the cerebrospinal fluid and the blood. Participants are assessed with PET scans, lumbar punctures and blood tests as well as detailed clinical and cognitive assessments at baseline and again at 3 years, to assess how measures of inflammation and tau accumulation change over time, and how they relate to the development of memory problems and dementia. Clinical follow-up will continue for up to 10 years.

Establishing whether inflammation and tau deposition are important early events in Parkinson’s disease dementia will bring us much closer to developing new treatments to prevent or slow the onset of this complication of the disease, which has such devastating consequences for patients and their families. We also aim to determine which combination of the imaging, CSF and blood-based markers we are studying is likely to be most useful for tracking progression of dementia and the effect of treatments on this over time – which will be critical for future clinical trials of these treatments.

This study is supported by funding from the Evelyn Trust and the Medical Research Council. 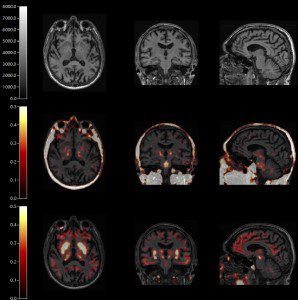 PET scan showing uptake of the ligand [18F]AV1451, indicating widespread cortical accumulation of tau in a patient with Parkinson’s disease.

The Pluripotent Stem Cell and Engineered Cells (PSEC) is a research hub under the UK Regenerative Medicine Platform (UKRMP), an interdisciplinary research program, established to address key translational challenges of regenerative medicine. The program under the directorship of Prof. Roger Barker is aimed at addressing key outstanding hurdles to translate human Pluripotent Stem Cell (hPSC) based cellular therapies into standard clinical practice and enabling their commercial development. We are generating new tools, protocols and resources

This project is funded by Medical Research Council. 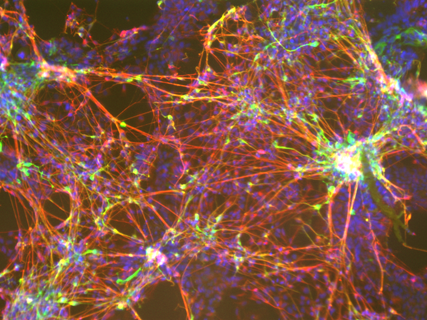 Mature dopaminergic neurons made from human embryonic stem cells. The neurons were grown in a dish show expression of tyrosine hydroxylase (green), an enzyme that converts L-tyrosine to L-DOPA, a precursor of dopamine. b-tubulin (red) is a pan-neuronal marker.

Marta Camacho is leading a study investigating gut problems in the earliest stages of Parkinson’s and how they are linked to immune activation, and disease progression.

Our long term cohort studies suggest that early constipation may be associated with more rapid disease progression. We would now like to test the theory that abnormal gut function in PD leads to changes in the bacterial constituents of the gut (the microbiome) and increased inflammation, which in turn activates the immune system and accelerates PD progression. To test this, we will assess gut function, immune activation and movement and cognitive (memory/thinking) changes over time in 3 groups: 1) patients with early PD, 2) people at high risk of developing PD, to assess whether gut problems exist in the advance of PD, and 3) healthy controls matched by age and gender. Participants will be assessed every year over a period of 3 years with a new questionnaire to measure gut problems, blood tests, and stool samples as well as detailed clinical and cognitive assessments. Further clinical follow-up will continue for up to 10 years.

Establishing whether gut problems and associated inflammation are important early events in Parkinson’s disease will help us to better understand how the disease works. If this study has positive findings, it may pave the way for developing therapies targeting gut function, in order to slow the onset of complications such as memory and balance problems, which are considered to be amongst the most devastating complications of Parkinson’s by patients and their families.

This study is supported by funding from the Evelyn Trust and the Dementia and Neurodegeneration Pilot Study Funding Scheme 2019-2020.